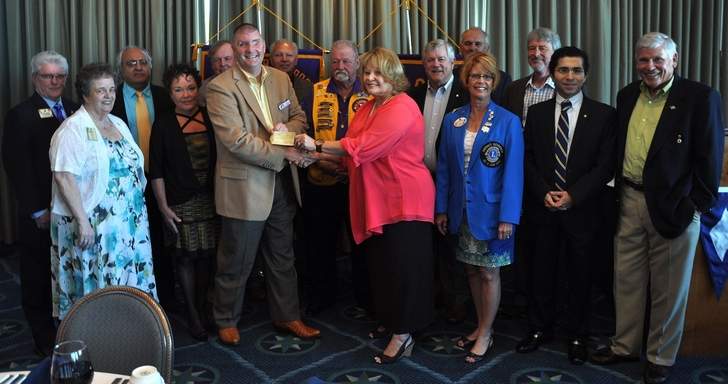 PONCE INLET – The Ponce Inlet Lions Club had cause to celebrate at its annual installation and awards dinner. They had set high goals, raising the bar for the group’s new officers and board members.

How did they do it? One sandwich and one soda at a time. And because 51 members can do only so much, they cajoled and strong-armed friends and spouses to pitch in. Then, these gold-shirted bratwurst- experts dragged out the grills, loaded them onto trucks, filled the coolers and headed out to car shows, dog shows, fish fries, and social and white-cane events to raise money for Lions’ causes.

“Significant private contributions also helped the Lions in reaching our goal,” said member Bill Wester. ”In particular, Tom and Margo Whalen of Ponce Inlet, who are huge supporters of veterans. In addition, the owners of Inlet Harbor Restaurant and Marina supported a major fundraiser.”

On hand for the recent installation event at the Halifax River Yacht Club, was Michael Jernigan, 36, a retired Marine Corps corporal, who lost his eyesight and part of his cranium in a roadside bomb attack in Baghdad in 2004. He credits his service dog, Brittani, with helping him through his recovery.

Copyright © 2015 News-JournalOnline.com — All rights reserved. Restricted use only.